World's Finest.... or The Dynamic Duo I always wished to see! 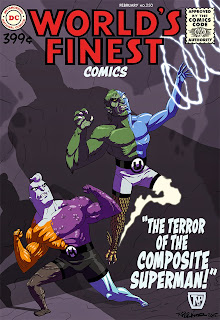 Metamorpho, the Element Man, debuted in The Brave and the Bold #57 (January 1965).[1] As first conceived, Metamorpho was a parody of the fantastic characters that populated comic books in the 1960s.[2] Artist Ramona Fradon was coaxed out of maternity-retirement to illustrate Metamorpho's first appearances.


Ultra the Multi-Alien was a science fiction superhero featured in comics published by DC Comics. He first appeared in Mystery in Space #103 (1965), pushing out Adam Strange and Space Ranger from that title. He was created by writer Dave Wood and artist Lee Elias.