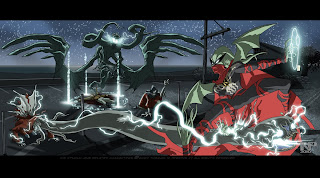 ...A snippet from the Kid Kthulu and The Innsmouth Seven... 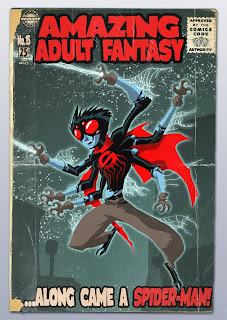 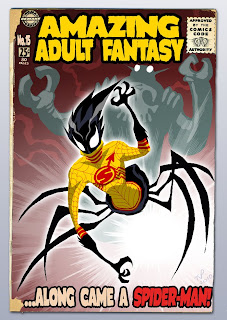 Another entry into the White Chapel forum hosted by Warren Ellis! To see more of the entries here is a link: freakangels.com/whitechapel/comments.php?DiscussionID=787...

As quoted of Warren Ellis' Forum: "Here's the rules:

You are an artist/designer. You have to put together the cover for issue 15 of a comic called AMAZING ADULT FANTASY.

Now, the publisher has decreed that, with #15, the title will become simply AMAZING FANTASY. But, I dunno, you're a drunk, or a drug fiend, or you have seizures or something, and you've totally forgotten about that. AMAZING ADULT FANTASY it is.

Thing is, there's a new character to be introduced on the cover. You remember that instruction. But you lost all the notes and pages -- you used them for bedding or toilet paper, you don't really recall. You know nothing about that character beyond its name, and that it apparently fits in a book called AMAZING ADULT FANTASY (which was once subtitled "The magazine that respects your intelligence").

All you know that is the title is AMAZING ADULT FANTASY, the issue number is 15, and there has to be a character called SPIDER-MAN on the cover somewhere.

It's up to you what kind of company you're at. What kind of comics you make. What era you're in. Who you are, even. Go nuts with it.

Kid Kthulu and the Dark Agents.... 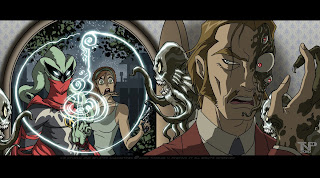 ...A snippet from the prelude to the climactic battle between Kid Kthulu and The Innsmouth Seven...

Kid Kthulu versus The Innsmouth Seven... 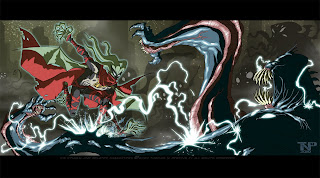 ...A snippet from the climactic battle between Kid Kthulu and The Innsmouth Seven... 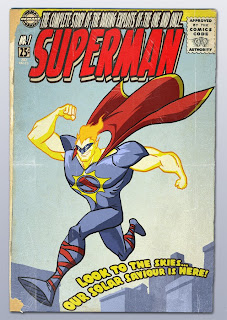 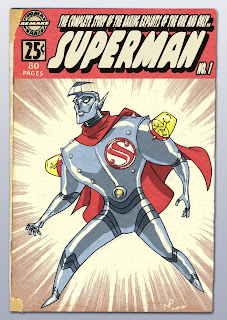 I saw the entries by DBed, Gaston25, Hartter for Warren Ellis' White Chapel forum theme of remaking Superman, and thought I would take a stab my self for kicks....

Thanks for the inspiration guys. You all have done really fun and interesting images for the forum.

The rules: Design a cover for a comic book. The character is named Superman who wears predominantly blue with a red "S". The cover needs to have the phrase "The complete story of the daring exploits of the one and only superman".
http://freakangels.com/whitechapel/comments.php?DiscussionID=7801&page=1
Posted by Thomas Perkins at 8:19 AM 1 comment: