Hey Kids! It is the Return of the Late Night Sketchamathingie....

©T.N.Perkins IV 2013 All Rights Reserved.
Posted by Thomas Perkins at 1:21 AM No comments: 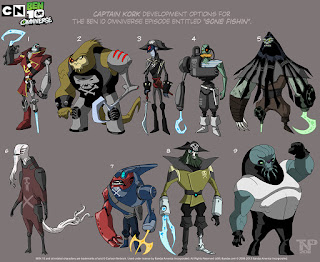 Since my stint on the original Ben 10 show, I have had the great pleasure to do freelance design on the newer Ben 10 shows. Here is some of the work that I did while developing the character Captain Kork as a freelance designer for the Cartoon Network Studios program "Ben 10 Omniverse". He appeared in the 13th episode, "Gone Fishin'" which aired on December 8, 2012 . I generated many possible ideas for Captan Kork and here a few of them.

Captain Chiroptera and the Mecha Menace of Doctor Mercurio!

Captain Chiroptera and the Mecha Menace of Doctor Mercurio!
©2013 T.N.Perkins IV All rights reserved.
Posted by Thomas Perkins at 10:15 AM No comments:

Captain Chiroptera and Crew versus the League of Villainy

©2013 T.N.Perkins IV All rights reserved.
Posted by Thomas Perkins at 4:50 PM No comments: