Here is a glimpse at some images I drew back in 2007 for the art test I did before getting to work on Sony Animations "The Spectacular Spider Man" with Sean "Cheeks" Galloway. My kids really dug this show!
Posted by Thomas Perkins at 4:27 AM 7 comments: 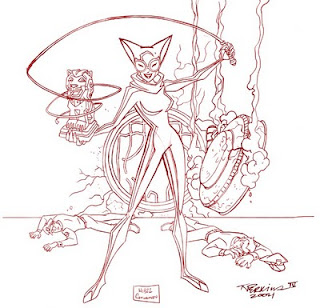 While working in animation, at times one might do ancillary art for merchandising related to the show you are on. Here is a rough drawing I did for toy packaging for a special edition Cat Woman toy from the show...

The Batman and all related characters are trademarks of and © Warner Bros. Animation & DC Comics Entertainment, All Rights Reserved.
Posted by Thomas Perkins at 4:08 AM No comments:

Vintage Work : Path of Development for Spellbinder from "The Batman" (2004) 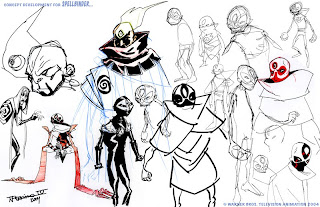 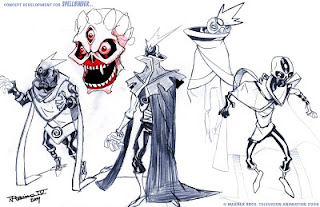 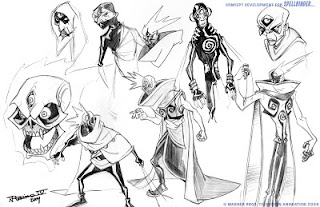 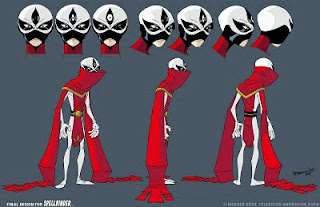 Back in 2004 I had the great pleasure of working onthe design team for "The Batman" over at Warner Bros. Of the many odd and fun folks I got to draw for that show, one of my favorites was a one off villain called Spellbinder. Here is a look at the path of development from my sketches that went into making that character...

The Batman and all related characters are trademarks of and © Warner Bros. Animation & DC Comics Entertainment, All Rights Reserved.
Posted by Thomas Perkins at 3:53 AM 3 comments:

Among my various gigs, I worked on the Cartoon Network hit, Ben 10. My tenure on that show lasted from the end of the First Season until the completion of the show with Season Four.

From that gig, I moved onto an ancillary project with Bandai. They had created an online game that was related to an episode we did called "Dr. Animo and the Mutant Ray" The the underlying premise being that Ben had broken the Omnitrix and was now transforming into hybrid mutations of his original ten aliens to form new and odd combinations. Here are some of the designs I did for the Bandai.com online game, "BEN 10- DNA Lab". I started designing these Hybrids last year and they have been unveiled in the game as each successive toy set game out. I did somewhere in the neighbor hood of 80 hybrids. This set is combining Ben's various aliens with his Greymatter alien form. Unfortunately they didn't end up needing the Greymatter designs and so they got left on the cutting room floor.

As the game has been out for a respectable time now and posted and reposted on fansites hither and yon, I figure that I can now display them in my portfolio without fear of leaking sensitive info. Many of you have seen these over at ~Akamu1228's gallery and similar fan postings.