Dimension X: The Potters of Firsk 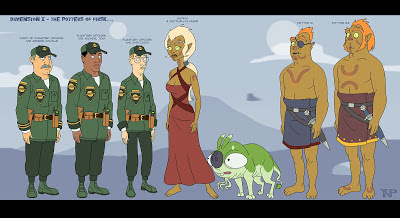 Here we ahave a bit of retro goodness based upon my love of Old Time Radio classics. This design work was based upon the story "The Potters of Firsk" by Jack Vance in 1950. His story was dramatized on the radio for the program "Dimension X"

Dimension X: The Potters of Firsk

From the text published on Jul 31, 2012 by David Longhorn

"From the American radio series Dimension X, this is one of the very few dramatisations of a story by Jack Vance, one of my favourite authors. Vance, if you don't know his work, took the colourful fantasy heroics of Edgar Rice Burroughs and adapted them for the post-war pulp magazine era. He writes with great wit and cool irony, and his heroes are often ruthless, adaptable men who see through absurd institutions and tackle supposedly insoluble mysteries."


http://www.youtube.com/watch?v=AILhAJKVqPE
Posted by Thomas Perkins at 12:48 AM