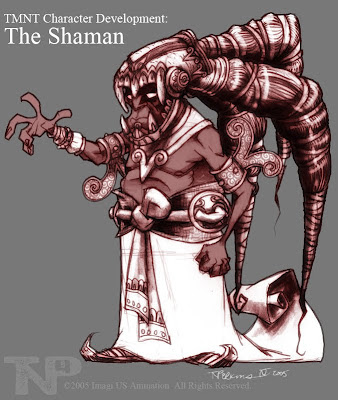 As many of you folks well know, a lot of work goes into the making of a film that never will see the screen due to editing or script cuts or the like. Here we have such a casualty. When working on the production of the CGI film TMNT (2007), there were many many cool characters that I got to work on. One such character that in the end never made it to the screen was The Shaman. He was to be part of the opposing force to Max Winters/Yaotl. The Shaman and their forces were routed when Winters accidentally loosed the 13 Beasts upon the world. Alas due to time the scenes with this character were cut at the storyboard stage and never made it to animation.

©2005 ImagiUS Animation. All Rights Reserved.
Posted by Thomas Perkins at 2:17 AM